More wildfires in Montana and the west, and a longer wildfire season, will mean more days of unhealthy air quality for Missoula County residents.

How does smoke affect health, and who is most at risk?

Explore how wildfire smoke creates vulnerabilities in the following sectors given climate change:

AGRICULTURE.
Wildfire smoke will have particularly severe impacts on farmers and ranchers due to the outdoor nature of their work. In addition, many small farmers rely on selling their produce at outdoor farmers’ markets, and their revenues suffer when attendance at farmers’ markets drops due to wildfire smoke. By obscuring sunlight, smoke also has the effect of delaying the development of fruiting crops, a particular problem in Montana due to our short growing season. 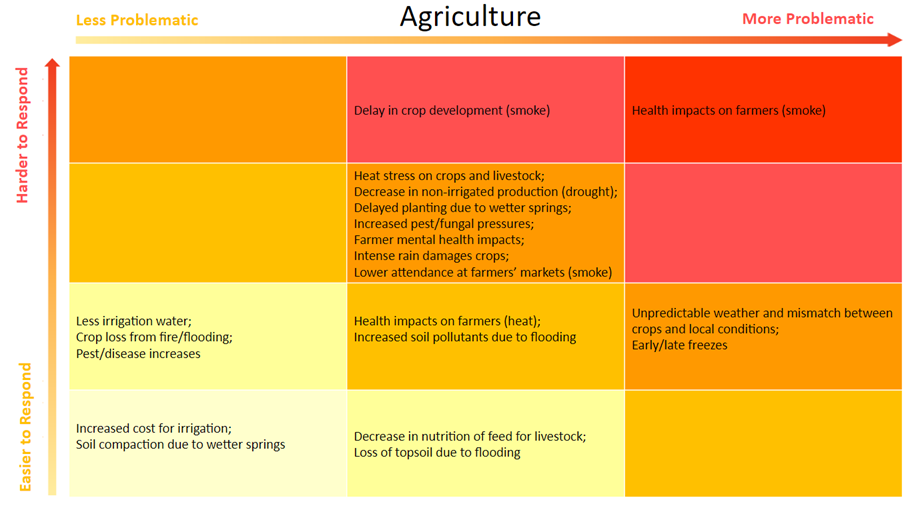 buildings and landscaping.
While public health officials often recommend that people stay indoors during periods of thick wildfire smoke, most buildings do not do an adequate job of keeping smoke out. Even in new, state-of-the-art commercial buildings, standard air filters (classified as MERV 8) do not filter out the fine particulate matter that is the most harmful component of wildfire smoke, and few residents or commercial buildings have HEPA portable air cleaners. This is most problematic in the case of homes, schools, and public buildings that should be available as respite places during episodes of wildfire smoke. 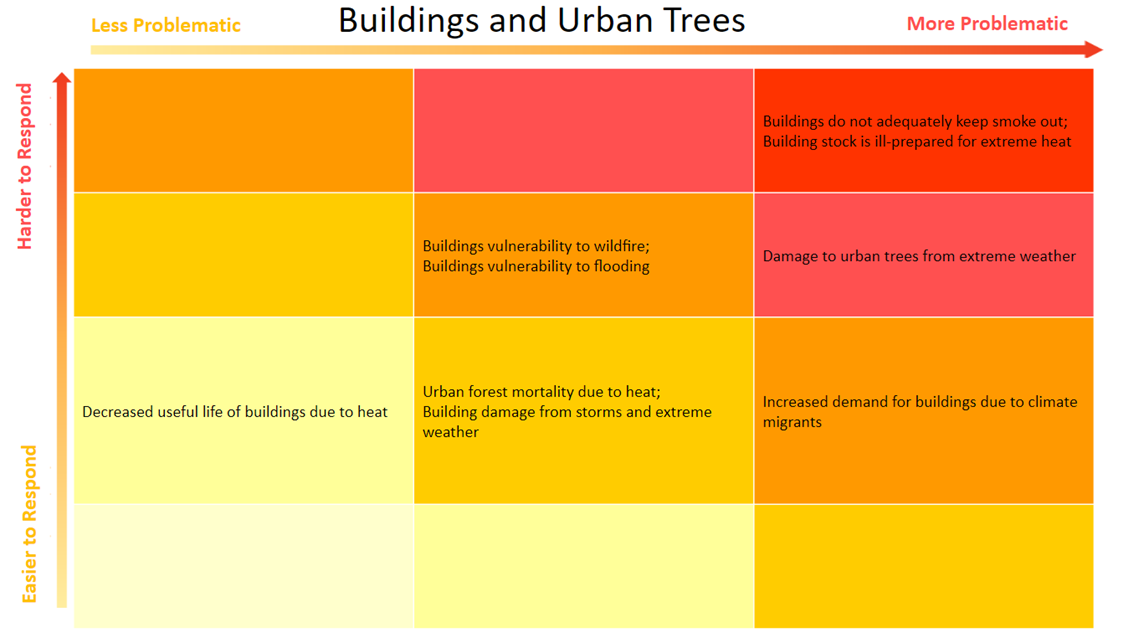 business, recreation, and tourism.
The businesses impacted most directly by wildfire smoke will be those involved in summer recreation and tourism. For example, a 2015 study of the impact of climate change on Montana’s outdoor economy estimated that visitation to Montana’s two national parks will decline by one third as a result of increased wildfires and smoke, resulting in the loss of approximately 11,000 jobs in the recreation and tourism industry statewide. Businesses in the town of Seeley Lake suffered losses in the summer of 2017 when visitors canceled their plans due to thick wildfire smoke. These outcomes are not always straightforward, however; for example, Glacier National Park experienced record attendance in 2017 despite wildfires and smoke.

​The economic impacts of wildfire smoke are not limited to the recreation and tourism industries. Smoke forces people indoors, reducing overall consumer spending and/or shifting consumer spending patterns (for example, shifting from in-person to online purchases), affecting a wide variety of local business owners. The need to cancel or reschedule summer and fall athletic events and festivals will also impact the local economy. Beginning in 2019, the Missoula Marathon was rescheduled from mid-July to late June due to concerns about wildfire smoke. Other events, both public and private (e.g. weddings) may follow suit, scheduling in early summer to avoid the risk of wildfire smoke and resulting in an overall contraction of the summer business season. Local businesses will also be affected by declines in the health and wellness of their employees, and associated increased healthcare costs.

​The full vulnerability grid for Business, Recreation, and Tourism, for all hazards, is shown below. 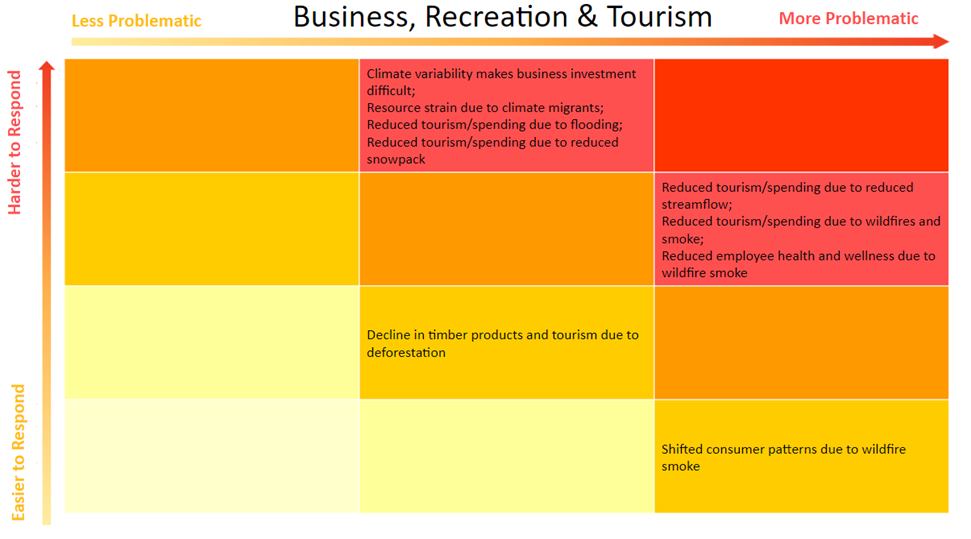 emergency preparedness and response.
More frequent and longer periods of wildfire smoke will increase the demand on first responders and emergency medical services, which are already stretched thin. A study of more than 1 million emergency room visits in California found a spike in ER visits for heart attack and stroke, as well as breathing problems, during periods of dense wildfire smoke. For adults age 65 and older, the rate of ER visits for heart attack increased 42 percent during periods of dense smoke.

In Missoula and Powell counties, the number of respiratory-related emergency room visits more than doubled between the unexceptional 2016 fire season and the record-setting 2017 season, from 163 to 378. The Missoula City-County Health Department recommended evacuation of the entire town of Seeley Lake in 2017 due to wildfire smoke, and there may be an increased need for such evacuations in the future.

​Emergency services personnel will be needed to coordinate evacuations and shelter refugees. In addition, firefighters and other first responders are particularly vulnerable to the health impacts of wildfire smoke due to their prolonged smoke exposure and high rates of physical activity. 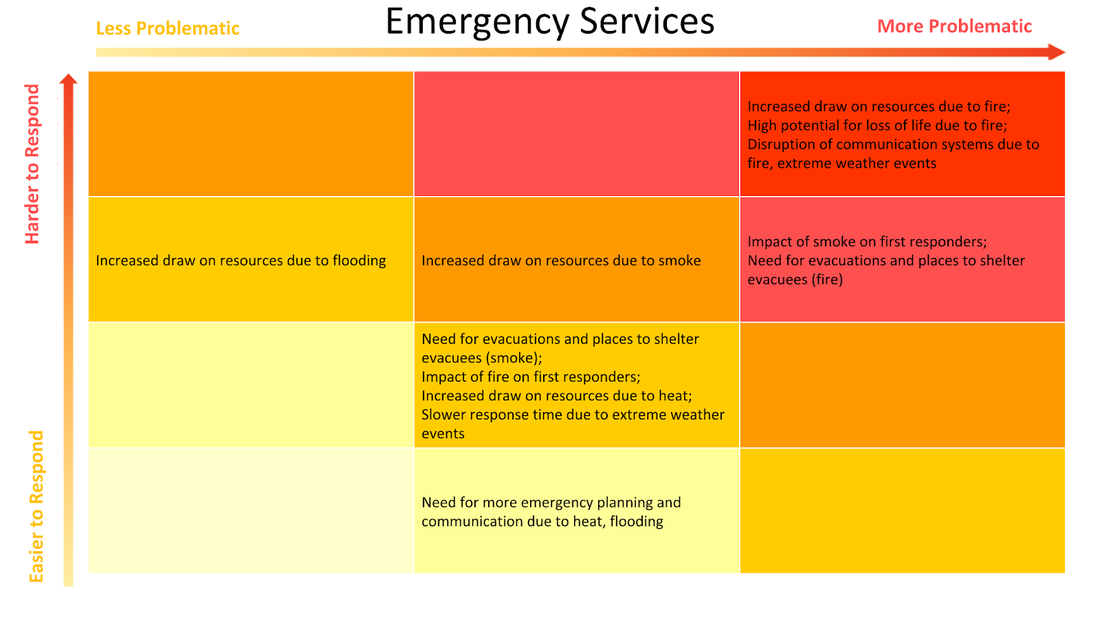 HUMAN HEALTH.
Studies have found strong associations between exposure to wildfire smoke and worsening of respiratory diseases like asthma and chronic obstructive pulmonary disease (COPD), as well as increased incidence of respiratory infections like bronchitis and pneumonia. Some studies have also found associations between wildfire smoke and cardiovascular problems like heart attacks and strokes.

Infants and children, older adults, people with existing respiratory or cardiovascular diseases, and outdoor workers are particularly vulnerable to wildfire smoke. Children are especially vulnerable because their lungs are still developing and because they breathe more air per pound of body weight than adults do. Growing evidence also suggests that the fine particulates in wildfire smoke are harmful to pregnant women and fetal development in certain stages of pregnancy.

In addition to its immediate physical health impacts, smoke has the effect of exacerbating chronic health conditions, limiting outdoor activities, and increasing isolation. All of these factors can contribute to increased stress and anxiety, exacerbating mental health conditions and substance abuse. Wildfire smoke makes exercising outdoors inadvisable, with worrying implications for physical health and obesity rates, particularly among people who lack the time and money to find indoor places to exercise. Even indoor exercise can be inadvisable during periods of thick wildfire smoke unless the indoor space has air filtration sufficient to remove fine particulate matter, which most buildings currently do not. 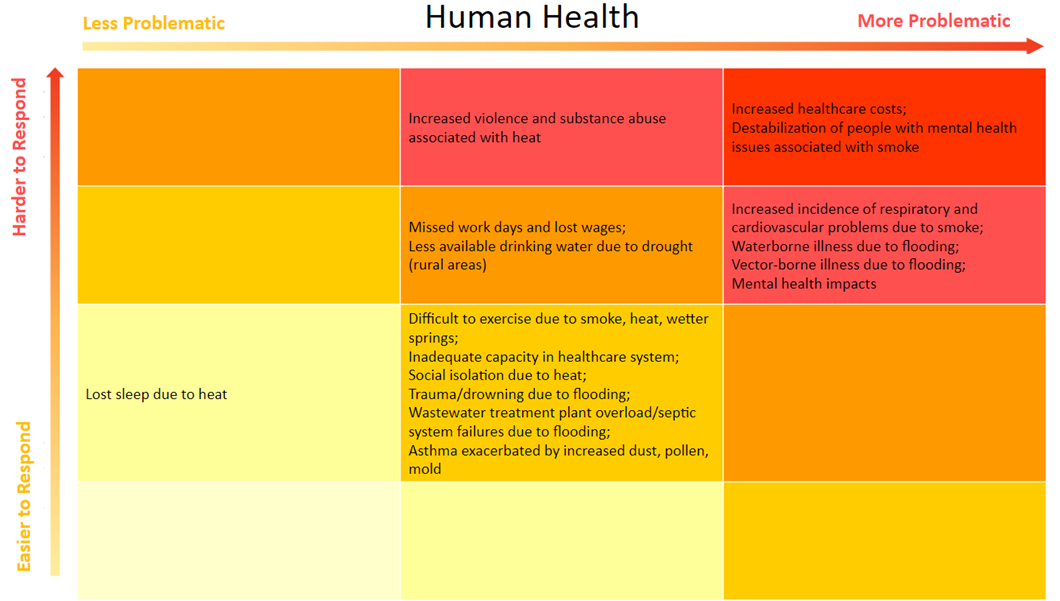